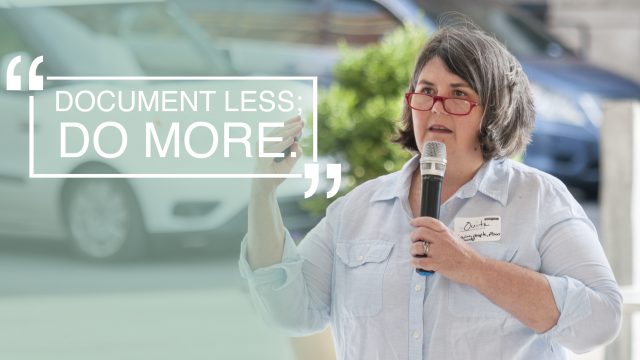 Surrounded by eager fans and beautiful weather, Creative Mornings Lexington held a discussion by iconic chef Ouita Michel at the Fifth Third Pavilion regarding her history in culinary, her philosophy on the craft and Lexington’s food culture.

Michel, a graduate of the University of Kentucky, detailed attending CIA in New York and her culinary adventures that brought her back to the Bluegrass and led to her running restaurants Holly Hill Inn, Wallace Station, Honeywood, Windy Corner and more.

Her philosophy on the best way to learn crafts and skills such as the art of cooking is hand-to-hand teaching. And despite her success in and out of restaurant kitchens, she’s adamant about the community needing to go to farmer markets and do their own cooking and not let restaurants define the food culture of the Lexington community.

According to Michel, she has spent over $3 million in supporting local food and a lot of that stems from her desire to be connected to the community. She started out cooking for friends and family and hating anonymity but then dedicated her professional career to cooking for a community.

She wants to keep building on that and for others to take fewer pictures and do more cooking. She says, “Document less; do more.”

As Michel wrapped up her discussion, she pointed to the old courthouse to where her new and final restaurant, Zim’s, will be. Named after her great grandfather, Zim’s will be  affordable family dining and the best of Windy Corner and Wallace Station and also a folk art setting.

Condado Tacos Opens in The Summit