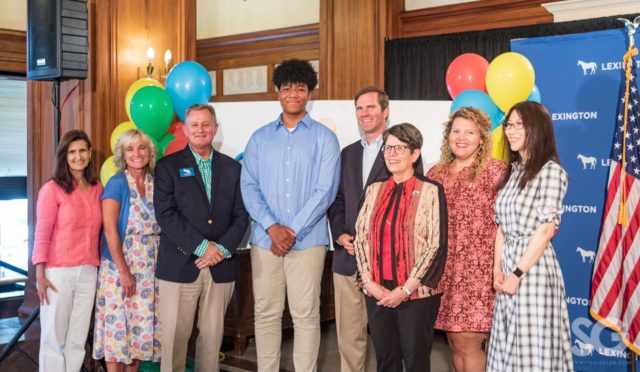 On Tuesday, June 15, Golding’s artwork will be featured on Google’s homepage for 24 hours for million of users to see.

As the national winner, Golding will receive a $30,000 college scholarship and Google hardware. His school, Lexington Christian Academy, will receive a $50,000 technology package.

Doodle for Google is an annual art contest open to students in grades K-12 nationwide. This year’s theme was “I am strong, because…” and students were invited to submit an artistic interpretation of the theme for the chance to have it featured on Google.com, along with receiving scholarships and tech packages for their schools.

Golding’s doodle is titled “Finding Hope.” In describing his Doodle, Milo says, “I am strong because I have hope. I once asked my father how he overcame obstacles and became who he wanted to be. Hope, hope keeps me strong. After I unexpectedly lost him at 13 due to a heart attack, it helped me overcome grief and support other children who lost loved ones.”

“Milo is one of those truly special young people who makes our school, community, commonwealth, nation, and world a better place,” said LCA Head of School, Dr. Scott Wells. “Milo’s message of hope is a powerful and courageous statement that inspires those around him to be a difference in the lives of others. This morning, he inspired our nation when word of his story broke in the news.”